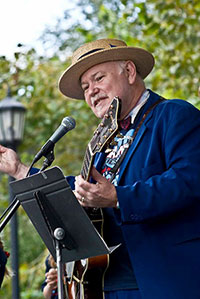 Tj Wheeler is a treasure of American Roots music, or better put, a living, one man Juke Joint! He performs his gumbo of Blues, Jazz, Ragtime and more on a wide variety of instruments, including the 7 string guitar, Ukulele, Tenor Banjo, 1 string Diddley Bow, Tap percussion, nitty gritty vocals & Kazoo! As a soloist or with his band, Tj takes his audience to the Blues of the Mississippi Delta, New Orleans second line jazz to his own contemporary blues and jazz original compositions.

Tj brings these musical genres to life in his inspirational & interactive performances and education programs. Students from schools K -12, universities, and all ages audiences at Blues, Jazz & Folk music festivals around the world have been enlightened by Tj’s knowledge of the history & stories behind the music as they are about his talented and passionate performances.

Tj’s workshop/concert, residency program Hope, Heroes and the Blues has been performed for over 450,000 students throughout the world. Tj often utilizes modern computer technology in making special multi-media presentation of his award winning educational programs and has won accolades from such diverse sources as Blues Revue magazine, Teaching Tolerance magazine, and the Boston Globe.

Currently, Tj also sits on the Board of Directors of the FRIENDS OF THE HAMPTON FALLS BANDSTAND INC.