Mr. Johnnie Billington taught the character of the Blues

I was musing today about my old friend and Blues in the school com-patriot Mr. Johnnie Billington. Thinking over what a divine soul and teacher he was, as well as remembering all the good times we had conducting BITS (Blues in the School) programs together down in Jackson Mississippi, I decided to feature him for this month’s TBA Musing the Blues column.

Figuring I should include some basic bio info for the article, I did a quick Google search of his name. I scrolled down a litany of sites that immediately popped up from various Blues Societies he had dome BITS and concerts for, interviews, and old video links of such performances. Instead of a bio though, I was hit suddenly with a short and simple obituary. Unbeknown to me, he had died last year; April1, 2013 at the age of 77. The OB stated that he had died due to “complications from a heart attack” at a hospital in Clarksdale MS. They did mention that he called the music of his ancestors his passion and his calling. Today I’ll write this short musing about him, and then have a libation in his honor, making sure I pour some of it to the ground for him and those very ancestors that gave us all this music we call the Blues.

Johnny and I first met in the early 90’s, I had been asked by John Ruskey of the Delta Blues Library to come back to Clarksdale to do some BITS programs and make a special presentation for regional Blues Musicians’. The latter especially intrigued me. Somewhat confused, I asked John “What could I possibly present to them?” After all, I had always been the student! Since I was a teenager, I’d had been studying Mississippi Blues, and in my early 20’s had traveled to Memphis to live next to Mississippi born Folk Blues legends, Furry Lewis and Bukka White. I told him, though I was honored by his offer, that I’d be more comfortable taking a class from them. John went on to explain that this was a little different. The Delta Blues Library had started conducting some regional BITS featuring some of the Clarksdale Blues musicians. The only trouble was, most of them, according to him, were mostly going in a doing Blues concerts opposed to a Blues educationconcert / program. Gradually I accepted his offer. Though not overly confident about the situation, after a day in local schools, John escorted me to little juke joint in a modest, stone building in Clarksdale. Its interior was definitely set up more for juking than having a makeshift classroom. Among the adult musicians there I immediately recognized was Big Jack Johnson, having seen him perform a number of times at local venues in Mississippi, Boston, and our own Portsmouth Blues Festival. Jack was with some of his band members and all of them seemed seriously attentive about being there.

The next thing that surprised me was the stage full of old Peavy Amps, Japanese guitars, a bass and keyboards. All of which were being played by young African American elementary to middle schools kids …and they sounded good!  John said “These are Mr. Johnnie’s Afterschool Blues Band.” He called over a gentleman, dressed in a suit and tie, with a twinkle in his eye, and introducing me said; “Here’s the Man himself …Mr. Johnnie Billington.” I expressed my admiration for his student band, to which he replied “These kids are starting to get there, as long as they follow the traditions I’m teaching and don’t get too big a head with themselves.” After which he let out a raspy laugh and slapped his knee.  John Ruskey agreed saying; “If anybody can keep’em on the straight & narrow, as well as playing the Blues it’s Mr. Johnnie.” Once again, I asked myself when they have this guy… what am I doing here?

The Presentation: This I kept as informal as possible. Going in the directions that John wanted me to, I explained the principals of my program Hope, Heroes’ & the Blues. I expressed the importance to me of, not only passing on the music, but passing on the African American history that the Blues grew out of. Addressing the silent shadow of Jim Crow still leering in the room after all these decades, I said “It’s one thing for me, as a White man to come down here for a few days in your schools and tell it like it was about the way Blacks were treated back in the day… the segregation, even the lynching’s with some of the older students, and then high tail it out of here before too many feathers get ruffled….especially my own. You though, lived through times when even looking at White man in the eye could get you killed ….Some things here have changed, some haven’t so much. Y’all are the best judges of that. For you to go to the same extreme as me in schools, frankly, I can’t recommend it. But can you tell them what the Blues was? What it represented and how it was, and still is, the Truth? Would you be able to say how it is a feeling that can be a release for built up frustration, whether that comes from lover’s quarrels, lack of money, or just how sometimes a good man or woman can be done wrong?” Though most of them were rather reticent at first, they soon became engaged in the discussion. Hopefully, if nothing else, I gave them one or two tips that would help them communicate the concept and intent of the music so the students could  feel the truth about what they were saying as well as what they were playing.  We also talked about teaching about the different generations of players like Muddy and Wolf, Sonny Boy, back to Big Bill, Bukka, Furry, Tommy & Robert Johnson, Son House, Charlie Patton, Memphis Minnie, Bessie Smith and taking it all the way back to work songs, field hollers, drum & fife groups and more. We talked back and forth on all of that, as well as encouraging them to get students physically as well as mentally involved, by singing, dancing, building Diddley bows, washtub bases, as well as asking questions, writing their own blues songs in addition to learning traditional songs.

Pointing out how impressed I was by Mr. Johnnie’s student band, Mr. Johnnie then suggested “Well in that case let’s let them loose on a couple of songs and then all join in with them.” He didn’t have to ask twice. The kid’s, who had been very attentive during the presentation, jumped up off their chairs, got their instruments on and turned on quicker than a rabbit in a thicket (as Furry Lewis used to like to say Moments later they broke into a hipper than hip version of ZZ Hill’s classic Down Home Blues. Eventually we all did wind up playing and jamming till the kids had to head home for supper.

Over the next decade or so Mr. Johnnie and I, together, appeared at occasional Blues conferences, and conducted several week – two week long BITS residencies at Brinkley Middle School in Jackson, MS. While I did many of the types of history lessons and activities I described at the presentation, Mt Johnny would create his own student Blues band. Filling up his old, mid 70’s RV with all the ragged but right musical equipment he had at the Juke Joint in Clarksdale, he made sure every student had an instrument to play! The school loosened up their school uniform policy as Mr. Johnny always insisted that ALL his band members come to school every day dressed in a suit & tie. Those that didn’t simply didn’t get to play and repeated offenders were cut loose, no if, and or but’s about it. Blues School with Mr. Johnny had consequences for both good and bad behavior. If a student didn’t have a suit and tie, Mr. Johnnie would call the student’s parents. By the next day, the students always miraculously would appear decked out in the appropriate wardrobe. It might have been bought at Goodwill store, but those students paraded up and down the school halls with their shoulders back and their heads held high. At the end of each residency we’d have a school wide concert, where we all jammed together to a packed auditorium of students, faculty and family members.

By the way, Mr. Johnny told me how he collected his vestige of so many instruments. Early on, with no State grant, or students who could afford lessons let alone instruments, Mr. Johnny, who was also a small engine mechanic, would rebuild discarded lawnmowers. He’d then instruct his band members to walk through their neighborhoods, knock on people’s doors, and ask them if they would like their lawn mowed for free!  Stunned by such a generous offer, let alone by such cute kids, the people would ask what possessed them to such generosity. “Well” they’d start to say; “I want to be in Mr. Johnny’s band so I’m mowing lawns with his lawn mower till I have enough money for an instrument.”

The people would usually respond by saying “I thought you said it was free!”

The young potential musician / entrepreneur would, as prepared, respond back saying; “It is…but if you’d like to, you can make a donation and if you can’t… I’ll still mow your lawn.” Mr. Johnny loved to tell that story; especially about how each child collected much more than if they had charged a flat fee.

Mr. Johnny had his ways about him. His robust, and somewhat hoarse, laugh was funnier than any of the jokes or stories he told but just barely.

The boys and girls in his bands (the one’s that didn’t bail after the first lesson or so) learned to love and respect him and even more importantly themselves.  Many of his former students have gone on to work as leaders and sidemen in professional blues groups that play throughout the Delta and internationally.

Johnnie Billington received several honors for his work in educating Delta youth, including The Blues Foundation’s “Keeping the Blues Alive” Education Award, the Sunflower River Blues Association’s Early Wright Award (for preservation of the blues), the Mississippi Arts Commission’s Folk Arts Fellowship, and the Artist Achievement Award from the Governor’s Awards for Excellence in the Arts. Billington also served as a master artist in the Arts Commission’s Folk Arts Apprenticeship Program and was featured in River of Song, the 1999 PBS television series focusing on music along the Mississippi River. 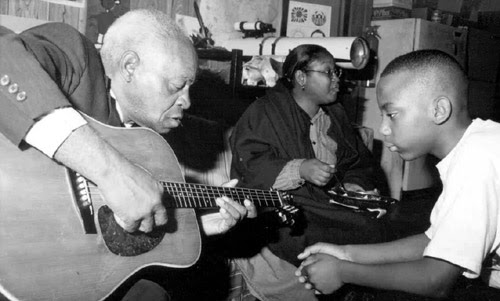 ‹ ‘Round About Bluestime is now online!